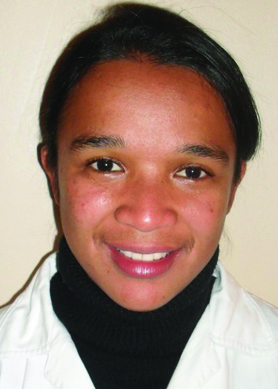 In 2010, Ms Sophie Tsinampoizina, from Madagascar, was accepted to AIMS South Africa. During her time at AIMS she discovered a passion for climate modeling. Her final project at AIMS, on the relationship between the climate variability over the Indian Ocean with rainfall over northern Madagascar, began a pursuit to become an expert on Madagascan climate.

“I have a vision of leading a change in thinking on how best to tackle climate and other development challenges. Mathematics can be used to create solutions that are both efficient and reliably correct in everyday life.”

After graduation, she completed a Master’s in Ocean and Climate Dynamics from the University of Cape Town, developing for her Master’s thesis a more comprehensive rainfall variability model for southwestern Madagascar.

Reworking her dissertation into a scholarly article, in 2016 “Interannual variability of rainfall characteristics over southwestern Madgascar” was published in the scientific journal Theoretical and Applied Climatology. The research gained the attention of the Regional Initiative in Science and Technology (RISE) based at the Institute for Advanced Study in Princeton, New Jersey. With the WIO-RISE Western Indian Ocean Regional Initiative, Sophie became part of a network of scientists working to grow local STEM expertise in southern African universities to stimulate economic development.

In 2016 Sophie’s work in climate modelling led to her being awarded a Climate Protection Fellowship from the Alexander von Humboldt Foundation. Together with Prof. Dr Andreas Hense of the University of Bonn, she has been working to create more accurate climate models using climate reanalysis for Madagascar and its surrounding Indian Ocean. “With climate change making weather patterns less predictable, having a clearer understanding of severe weather events is now more important than ever.” She says.

Though her work has taken her out of the continent, for now, Sophie proudly describes herself as an ambassador for Madagascar.