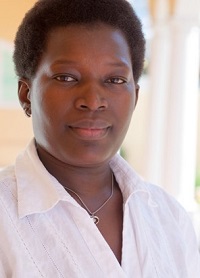 From Tanzania, Dr Angelina Lutambi was one of AIMS’ first graduates, graduating in 2005. She then pursued her Master’s in mathematics at the University of Stellenbosch and her PhD in epidemiology at the Swiss Tropical and Public Health Institute, at the University of Basel in Switzerland.

Angelina is a leading researcher at Tanzania’s Ifakara Health Institute where she is developing and simulating mathematical models to investigate the role of mosquito dispersal on malaria transmission and vector control. The WHO estimates that there were about 207 million cases of malaria in 2012, resulting in over half a million deaths in Africa, mostly among children. It is especially major in Tanzania where, in 2010, about 57% of the population lived in areas where transmission remains moderate to intense.

“I research models to explore the impact of health interventions to help inform policies in Tanzania.”~Dr. Angelina.

Angelina has also worked on mathematical modelling of a range of infectious diseases including HIV/AIDS which are Africa’s major challenges. Angelina has become a prominent woman scientist in Africa and around the world. She is a fellow of the Third World Organization of Women Scientists and has spoken on her work in several forums, including the 7th European Congress on Tropical Medicine and International Health in Barcelona in 2011. In 2014, she returned to AIMS South Africa as a lecturer.