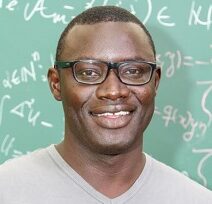 Mouhamed Moustapha Fall is currently the President of the AIMS Senegal Centre and an Endowed Chair of Mathematics and its Applications of the institute.

After following the Diploma program at the International Center for Theoretical physics (ICTP) in 2005, he defended his PhD in 2009 at the Institute for Advanced Studies (ISAS/SISSA) in Italy. He then became an assistant lecturer at the Université Catholique de Louvain-La-Neuve in Belgium from 2009-2010, after which he became a Humboldt Postdoctoral Research Fellow at the Goethe-Universität Frankfurt, followed by a postdoctoral position at the Università Degli Studi di Milano-Bicocca. Since 2013, he has been the Endowed Chair of Mathematics and its Applications of AIMS-Senegal.

Moustapha has served as:

His research areas are Differential Geometry and Partial Differential Equations, with a particular focus on Isoperimetric and functional inequalities, regularity theory, nonlocal equations, and overdetermined equations. Other research interests include Mathematical modelling for socio-economic, ecologic systems, and Agent-Based modelling. His research has earned him international recognition. In 2018, Moustapha was an invited speaker at the 2018 International Congress of Mathematicians in Rio.