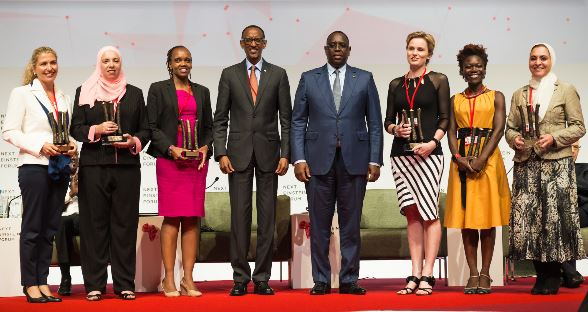 In a development that first emerged when President Paul Kagame first met with Neil Turok, the Founder of the African Institute for Mathematical Sciences – Next Einstein Initiative (AIMS-NEI), the Government of Rwanda through the Ministry of Education signed a partnership agreement with the latter to bring operations to Rwanda. The deal signed at the beginning of this year would see AIMS establish its secretariat, global headquarters of the Next Einstein Forum (NEF), and launch the Quantum Leap Africa research centre in the country. Core courses offered by the Institute include an intensive one-year masters programme in mathematical sciences. One of the founding partners of NEF and the African Science Leadership Programme (ASLP) is the Germany-based Robert Bosch Foundation.

Dr Ingrid Wünning Tschol, the Foundation’s Senior Vice President of Strategy is in the country on a study tour. She has already met officials such as the Minister of education, University of Rwanda Vice Chancellor and the Director-General National Commission of Science and Technology, among others.

The Education Times’ Solomon Asaba caught up with her in an exclusive interview. Below is what she had to say;

Rwanda is working on the Next AIMS-NEI centre, how do you think this relates to promotion of science, technology, engineering and mathematics (STEM) studies in the country?

I think it is extremely correlated; the Next Einstein Forum (NEF) is mainly about STEM but we are not forgetting the humanities and social sciences because we think they are very important too. The goal of NEF is to showcase the African potential to the rest of the World. That is one goal and the other is to create a stronger scientific community, network the African scientific community amongst themselves and the rest of the world. I think if many African STEM scientists are participating in the NEF and others from social science and humanities, they will also meet each other, have plenty of time to exchange on science policy because it is not a specialist meeting where they learn the latest detail about their subject, it is more about speaking science policies, showcasing that there is a lot of potential here, making themselves known to other leaders in Africa and decision makers from the rest of the world. And I think it is very important that everybody knows that there is big potential in African and Rwandan science. I think it fits with the country’s goal to increase spending of university education in STEM from currently 40 per cent to 80 per cent, and in the long term to 90 per cent.

Why is it necessary to promote STEM but balance it with humanities and social sciences?

I think it is very wise to promote STEM but I have the feeling that once you get to 90 per cent, you really have to make sure that the remaining 10 per cent is very good in humanities and social sciences. This is what keeps your society together because they help in implementing everything that STEM scientists generate.

One thing which is universal to most of African countries is that the participation of girls remains low in most STEM fields, why?

The participation of girls in Europe is also low; I come from a country where the proportion of women in the highest academic level like universities is low. For instance, women make up like only 15 per cent of professors but could be as low as 10 per cent. Africa and Europe are in the same boat and the foundation developed a few instruments to encourage, women specifically, to go into STEM. When I visited the School of Architecture at the College of Science and Technology, I was impressed with students from Scotland and Rwanda working with high school girls to encourage them. It is important to invest some money to encourage girls go into science. I think that is one part. We want to be treated equally like the men. The other part is that women approach science in a very different way. For instance, in the current state men design cars that turn out unpleasant to women with all sorts of technologies involved. That does not serve the needs of women.

Talking about research, most of it is funded by donor agencies that dictate the type to be conducted; does this affect the development of people in STEM?

It is a big problem that most of the research in many African countries comes from outside and the donors normally sit in Europe or other developed countries. They have their own ideas over the kind of research to be funded here yet I think the idea should come from Africa basing on what is important for these countries. I am very optimistic about Rwanda because your government wants to set up a fund and a ministry to develop a grant agency. It may not start with huge amounts of money but it will be possible for the first time that researchers from Rwanda can competitively apply for grants from Rwanda. This funding agency will itself decide the right strategy and the areas to focus on. You don’t want a research agenda in your own country being written by someone from outside.

The proportion of women asking for grants is still lower than that of men; is there any particular reason?

We have the same problem in Europe; the most prestigious grant you can ask for is the European Research Council Grant. However, fewer women apply for it than men. American social scientists have found this one explanation that says; men are more daring and more self-confident even though it is very difficult to get grants.

Women only apply if they know they will get a grant and I think we women are wrong about that. We should just be courageous and not be bogged down by what could happen next.

It is usually said that scientists have a huge role to play towards ending diseases yet Africa has been a continent disturbed by all sorts of ailments. What do we need to do?

I know that infectious diseases are a problem in Africa but what I really find very important is to raise the awareness. With the new kinds of food that are introduced on the markets, there are other dangers waiting for you when it comes to this. Worldwide and in areas of Africa, non-communicable diseases, such as diabetes and cardiac problems, are going to be the biggest problem and if the researchers here don’t conduct appropriate research to inform governments, that is a huge problem as more people in Africa will be affected. The huge mistake people make is turning away from home cooking to fast foods. If you turned entirely away from the knowledge that has happened in Europe of cooking from good ingredients then these disease await you. It is possible in Rwanda to encourage health foods.

The journal Nature just produced a publication showing that the number of obese people is for the first time overtaking the number of starving people. Obesity is all the time very correlated to cardiac arrest. I really want to see that Africa does not copy our mistakes in terms of feeding.Currently, there 15 AIMS-NEI fellows, and 54 ambassadors from Africa isn’t this number too small?

During the selection process, we look out for excellence, I agree with you; I would ask for 20. When discussing with the editor of the Journal Nature, he was afraid that next time we may not find enough individuals. I am not of this opinion at all, of course we can; one part of the programme is to identify potential people, then fish them. I have met so many young people who can qualify. On the other hand, we need not to have many because it is still something exclusive and it is not when the next NEF happens that we should support them. Successful individuals get all sorts of other benefits invitations to many places to give talks.

If you sampled top offices, most bosses are men, isn’t this because women are shying away from fields such as engineering and neuroscience?

I have heard that argument many times from prominent people who always said selection is based on excellence not gender, and I guess you would agree with me that the percentage of excellent people among females must be as high as that of excellent men; that I guess nobody doubts. So we have to encourage women and women have to encourage themselves. We don’t make a compromise; if we don’t have excellent women in the pool we have, we can go and look for others, but can’t accept anyone just because they are not enough women.

My message to Rwandans and other Africans is to show their potential; go to Europe, show them we know how to do things too. Be more aggressive.

About the Next Einstein Initiative

Albert Einstein was a German-born physicist who developed the general theory of relativity, among other feats.

He is considered the most influential physicist of the 20th century.

Born in 1879, Einstein had a passion for inquiry that eventually led him to develop the special and general theories of relativity. In 1921, he won the Nobel Prize for physics for his explanation of the photoelectric effect before migrating to the U.S. Einstein is generally considered the most influential physicist of the 20th century, with his work also having a major impact on the development of atomic energy. With a focus on unified field theory during his later years, Einstein died on April 18, 1955, in Princeton, New Jersey.

The Next Einstein Initiative intends to make it possible for an African to emerge as the next boundary-breaking scientist; the spiritual successor to Albert Einstein. It was created by South African physicist Neil Turok in 2008 as his “wish to change the world” using the $100 000 TED prize.

In 2008, Turok gave a speech in which he declared his wish that the next Einstein would be from Africa. The speech was a rallying call for investment in maths and physics research in Africa. The “Next Einstein” slogan became a mission for the organisation Neil Turok had founded to bring Africa into the global scientific community: the African Institute of Mathematical Sciences (AIMS).

Currently, there are 15 “Next Einstein Fellows” and 54 “Next Einstein Ambassadors”. Most of them are young African scientists, often leaders in their fields, working and studying in Africa.

Next Einstein serves as a fund raising mechanism to create offshoots of the African Institute for Mathematical Sciences (AIMS) located in Muizenberg, South Africa. Fifteen other centres are to be established over the next decade, including the existing centres in South Africa, Senegal, Ghana and Cameroon. Operations are also expected in the Rwanda soon.

The intention is to raise an endowment sufficient to fund 50 annual bursaries at an eventual 15 AIMS centers; $10 million per center for a total of $150 million. Matching funding from governments, educational institutions and philanthropic sources is to cover the running costs of each centre.