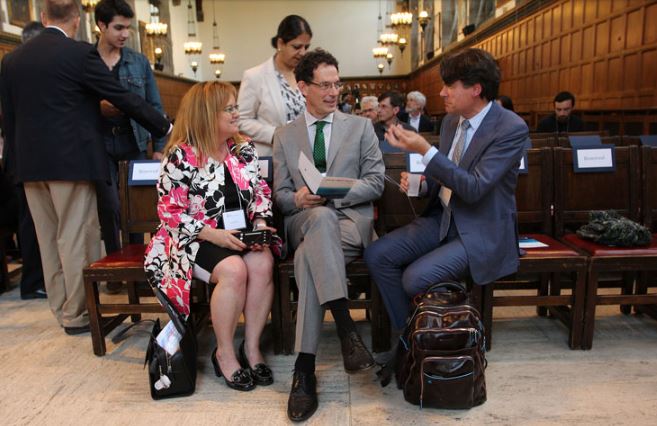 #UofTGrad16: A love-in for Mathematics

Fresh off receiving his honorary doctorate from U of T, Manjul Bhargava was the guest of honour at a special panel discussing It’s All About Math!

In a room filled with people who love math, he received a rock star welcome as he extolled the importance of fostering in children an appreciation of the creativity and beauty found in math.

All too often, being good in math is seen as “social suicide” in North America — especially for women — and that needs to change, said Bhargava, the leading expert in Number Theory and winner of the 2014 Fields Medal, the highest honour a mathematician can receive.

“When you meet someone and tell them what you do, they always say, ‘I was never good at math,’” he told the audience, which nodded and laughed in shared sympathy.

“The conversation almost always stops there… They’re almost proud of it. It’s a cultural thing in North America but it’s not universal. Here, it’s a badge of honour. It shows you’re socially forward.”

The panel, which was brought together on June 10 at Hart House, also featured Neil Turok, director of the Perimeter Institute for Theoretical Physics;  Irene Sterian, a director at Celestica (and U of T engineering alumna); and Professor Luis Seco, director of U of T’s RiskLab.

At the event, Professor Kumar Murty, chair of U of T’s mathematics department, also announced the creation of a new Centre for Applied Mathematics at the university. Currently, the math department is ranked #1 in Canada and 14th in the world.

Education is always the key when it comes to boosting math participation, the panellists agreed. Teachers need to discard their reliance on rote learning in math class and embrace the creativity inherent in their pupils when it comes to solving problems.

“Math is already inside of us. You just need to bring it out,” explained Seco, who is also the president and CEO of Sigma Analysis & Management. “When they say they’re not good at math, I say ‘How do you know?’”

Doing 500 examples of the same problem was pointless to me, said Turok, who learned how to figure out problems on his own when his teacher in Tanzania encouraged him to make a map of his school. The same goes for the old train travelling puzzlers — a favourite on high school math exams everywhere.

“Why would I care when two trains are going to meet?” Bhargava asked jokingly.

When Sterian moved to Canada from Eastern Europe at the age of 12, she couldn’t speak English but “I could speak math,” she said proudly, adding perhaps the problem “of today’s society of instant gratification” is that people aren’t spending enough time on math to become good at it.

For Turok, who is also the founder of the African Institute for Mathematical Sciences, math tells us something about who we are. It’s our language to explain the universe and our place in it and it makes him incredibly optimistic about our future.

“It’s incredibly precious,” he said. “The thing I love most is it’s simultaneously our most precious knowledge and it’s infinitely fruitful and it’s completely free to share. Math genius can occur anywhere. Sharing mathematical knowledge is the key to humankind’s future.”