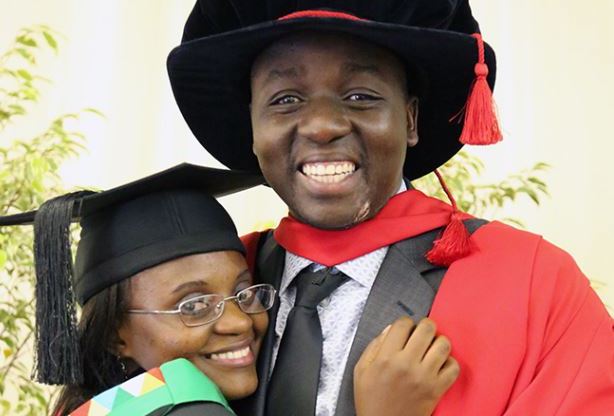 Ugandan national Dr Joseph Malinzi was awarded his PhD in Applied Mathematics for work done on the mathematical modelling of cancer treatments and the role of the immune system’s response to tumour invasion.

‘Mathematical modelling is a cost effective tool for simulating complex real-life situations using equations to predict the behaviour of the system,’ explained Sibanda.   ‘Joseph’s study was primarily concerned with using differential calculus to construct models for tumour invasion dynamics and growth, and investigating the significant parameters in cancer treatment.’

Sibanda said the critical biological factors during tumour invasion were determined theoretically and a systematic analysis of the immune system response to oncolytic virotherapy treatment given. ‘Joseph further investigated how drug infusion methods determine the efficacy of chemo-virotherapy treatment.’

‘Joseph is a very hard working and outgoing, sociable fellow,’ said Sibanda.  ‘He completed his PhD in the minimum possible time, and this despite taking a rather heavy tutoring load to supplement the small study bursary from his supervisors.  He will be continuing with post-doctoral study.’

Malinzi said he chose UKZN for his PhD because of its high ranking in Africa and because of the attraction of studying in his particular domain of research under Sibanda.  ‘I also enjoyed the privileges and amenities that come with doing research, for example working space, fee remission and a good post-graduate student lounge,’ he quipped.

Malinzi explained what attracted him to Applied Mathematics in the first place.  ‘I think that one of the solutions to Africa’s problems is through Science. One of my goals is for me to make a difference in the world through my abilities. I was motivated by the fact that applied mathematics, specifically mathematical biology, can contribute to solving real life problems.’

Malinzi thanked God, his parents, his siblings, his supervisors, the African Institute for Mathematical Sciences (AIMS- South Africa), and his fiancé, Ms Winnie Nakiyingi, who also graduated this year, with a MSc in Statistics.

He also expressed gratitude to UKZN for the fee remission he received.

Malinzi had the following words of advice for students:  ‘Grab research opportunities, live by example and take responsibility in order to make the world a better place for all of us.’