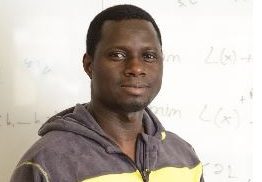 Bubacarr Bah Has Been Awarded the Prestigious German Chair in Mathematics

Bubacarr Bah, a postdoctoral researcher in mathematics at the University of Texas at Austin, has been awarded the prestigious German Chair in Mathematics, valued at $700 000, which is awarded by the Humboldt Foundation to researchers wishing to work at the renowned African Institute for Mathematical Sciences – South Africa.

Bah, who’s research is at the intersection of applied math and computer science, will spend four years at AIMS – South Africa, while also having opportunities to collaborate with various German academics and universities. The Humboldt Foundation provides this fellowship in order to both promote the development of African mathematical institutions, but also to foster international collaboration between German and South African scientists.

At UT Austin’s Institute for Computational and Engineering Sciences (ICES) Bah’s research has been in developing the mathematical techniques necessary to better send and receive information (called signal processing), as well how to build better practical approximation techniques for many real world problems.

The African Institute for Mathematical Sciences – South Africa is one of six schools in the pan-African AIMS system, which also has international chapters in Germany, the United Kingdom and Canada. AIMS – South Africa is the strongest research school in the system, and as a whole the AIMS schools have produced alumni and researchers who serve in some of the highest technical leadership roles on the continent.

Source: The University of Texas at Austin