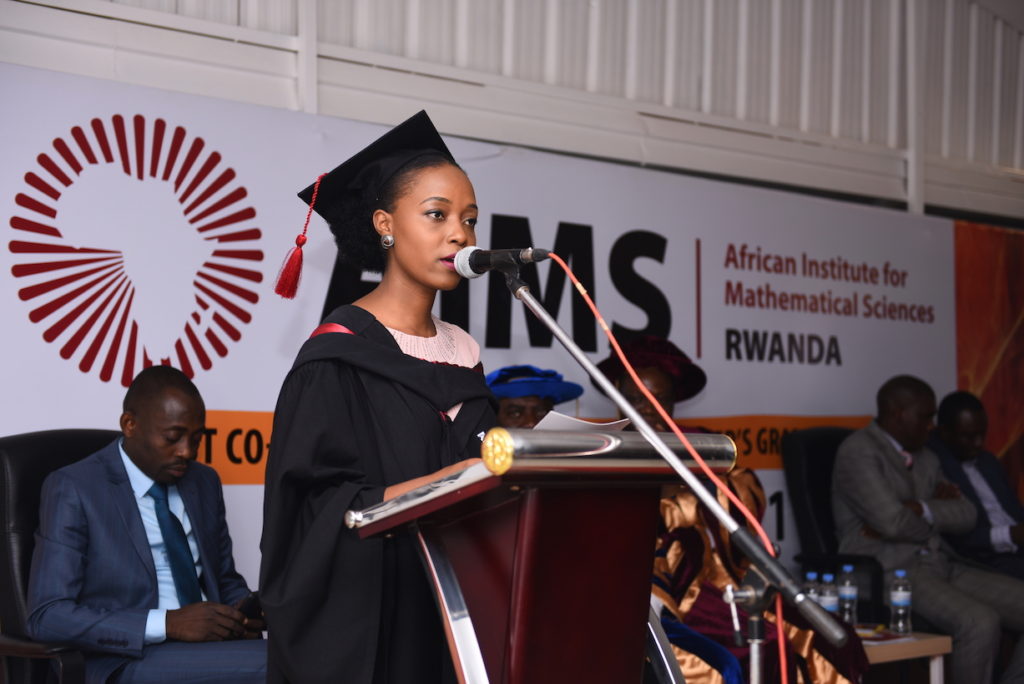 Sylvera Massawe, a young Tanzanian woman, who recently completed a Co-operative Master’s degree programme in Mathematical Sciences at the Africa Institute for Mathematical  Sciences (AIMS) Centre in Kigali, Rwanda is determined to inspire disadvantaged girls in her country to follow her footsteps.

Massawe had the opportunity to undergo the 18-month industrial-based programme that blends course work and practical industry experience with nine other students from Cameroon, Chad, Kenya, Madagascar and Nigeria.

“The ball has been thrown to us now.The ball of transformation and positive change. It is upon each of us to utilize the potential within us to affect as many lives as possible. You can do it.It begins with you,” she said in a passionate graduation speech delivered on behalf of her colleagues.

The degree which is supported by the Mastercard Foundation Scholars program provides students with a combination of academic training and experience in a professional work environment. It enables students to develop valuable work skills so that they can successfully transition from school to progressive careers.

Now back in her hometown in Dar es Salaam, Tanzania, where she is the first born in a family of three girls and two boys, Massawe wants to play an active role in improving the conditions of the girl-child instead of waiting for the government to take action.

“I feel like there is much to be done to empower women and support young girls to achieve their goals. I think many girls have a lot of useful ideasandabilities but lack the support they need,” she said.

Maasawe said that she has the will of a strong woman. This is not surprising for a girl who watched her mother take on fatherly responsibilities following the death of her father in 2012. Her mother’s resilience not only sustained the family but also inspired Massawe to work hard.

“My mother pushed me in various waysfrom finding my schooltuitiontosponsoringextra-classesto ensureI did my best at school and outside school. I participated in many competitions like essay writing, debates and sports as a way to build my confidence and networking skills,” she said.

Her mother’s efforts were on display as Massawe walked with a firm step towards the podium raised above the audience to deliver a graduation speech on behalf of her fellow graduates at the AIMS Rwanda Centre. Her eloquence and charismatic presence would have made any mother proud.

Asked what needs to be done to empower girls to achieve their dreams, Massawe said efforts must be invested in motivatinggirls at lower levels to follow their dreams and not to be influencedby whatsocietyexpects of them.

“We need toencourage girlsto do what they are best at and be supportive of their decisions especially at the family level. We also need toidentify key women-leaders in our communities to be role models to the younger girlsto give them the confidence that it is possible to make it,” she said.

Her outstanding performance earned her a slot at the University of Dar es Salaam in 2014 where she pursueda degree inActuarial Sciences and graduated with afirst-class degree which set her up for admission into AIMS in 2017.

“It was not an easy decision since I had several other opportunities. For instance, I had been accepted for a graduate training program at KPMG and PWC auditing firms, but I decided to join AIMS because of my hunger for knowledge and exposure. But most of all, my mother advised me to do what suitsmy interests and that made things easier for me. She has always been supportive of my decisions,” she said.

With an AIMS degree in her possession now, Massawe is confident that she can still join elite corporate firms such as KPMG and PWC.  But she intends to juggle career aspirations with her other passion to build a platform to support underprivileged girls.

Asked what she regards as some of the prevalent barriers standing in the way between girls and STEM education, Massawe pointed out cultural backgrounds, social structures, misinformation about STEM subjects to young girls and limited awareness of initiatives to support girls in society.

“My exposure at AIMS, the resourceful people that I engaged with and my own training puts me in a position to make a difference, to not lament but to do something about breaking those barriers and clear the way for many more girls in Tanzania and beyond,” said Massawe.

Massawe hopes to empower girls through an organization that she will set up and lead. In all the institutions she conducted her studies, Massaweassumed leadership positions in different capacities including managing charity teams and career building sessions to girls and boys of lower levels all of which helped sharpen her leadership skills.

“So, in the near future,I hope to start an organisation to guide girls in secondary schools on career choices and make them aware of the options out there. I want to encourage them using my own achievements that it is possible,” she said.