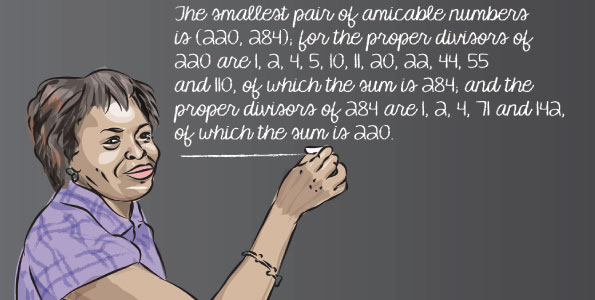 Women and mathematical sciences should make an amicable pair in Africa

I recently spoke to someone who told me that mathematics and science are gender blind. They do not see sex, gender, race, ability. It is simply numbers and equations and if one has the right aptitude, they can learn and apply it.

If mathematics and science were indeed gender blind, why are there still so few women in these areas, particularly in Africa? And why, when we talk about gender equality in science, does the conversation usually start and stop with the need for more women in science?

So what needs to be done to level the playing field for women in mathematics and science across the continent? And how can we facilitate a wider discussion beyond just statistics?

According to Unesco, despite arguments in favour of women’s participation in science, the sad truth is that women only represent 29 per cent of researchers around the globe (across 121 countries with available data).

At AIMS, we are working to level the playing field by closing the gap for African women mathematicians and scientists and engaging and involving men in this process.

Multiple studies across the continent have shown that gender stereotypes, gender discrimination and gender-based issues create multiple barriers for women in the mathematical sciences.

The challenges span all areas of life. Girls and their families are socialised to believe that boys have a natural aptitude for maths and science that girls lack.

The lack of female maths and sciences teachers, gender biases in curricula and pedagogy create disincentives for girls who are unable to see the relevance of this field in their lives.

The lack of role models in academia, research and industry make it difficult for girls and their families to see this field as a viable livelihood for women. Women face significant challenges when it comes to promotions and leadership roles in industry.

Despite the recognition of the need to close the gender gap in maths and science, progress has been slow at tertiary levels and beyond.

What is even more worrying is that in the field of mathematical sciences, it is hard to say for certain how much progress has been made because there is a lack of comparable, comprehensive data.

In her September 2014 address at the 3rd Annual African First Ladies Discussion on Science, Technology, Engineering and Mathematics, the Chair of the African Union Commission, Dr Nkosazana Dlamini Zuma, emphasised that African development will not happen at the pace and depth it needs to without the empowerment of girls, youth and women, especially in the sciences.

The development of skills in areas of science, technology, engineering and mathematics is needed, she said, “to modernise agriculture and agro-processing; to build, expand and maintain our infrastructure; to develop manufacturing and add value to our natural resources and to mitigate and adapt to climate change.”

This year’s International Women’s Day came at the midpoint of the African Women’s Decade (2010-2020), which aims to accelerate gender equality and women’s empowerment in Africa. In line with this, the African Union has dubbed 2015 the Year of Women’s Empowerment and Development towards Africa’s Agenda 2063, further cementing the role and contribution of women as critical to Africa’s future.

What we need now is strong leadership to break through these gender equality challenges in an innovative and scalable way. As we look to the future, we need to recognise the strides we have made in women’s rights, especially with regard to the Millennium Development Goals.

Over the past 10 years, the African Institute for Mathematical Sciences has actively changed perceptions and trained almost 800 African men and women who have gone on to make significant contributions in Africa and abroad.

Our students are producing world class research and impacting industry in areas like financial modelling, which optimises banking operations, mobile technologies, Big Data and infectious and non-infectious diseases. They are changing the continent’s scientific landscape and impacting communities.

In addition to our 30 per cent mandatory ratio of women students, our live-together, learn-together model brings women and men from across Africa together for a year. During this time, all the students work closely together.

This collaboration enables male students from different cultures, backgrounds and religions to see just what their female colleagues are capable of and deconstructs the notion that men are naturally better at mathematics and science.

The AIMS model works because it gives young men and women the opportunity and environment to study cutting edge science and technology as well as the leadership that unleashes their potential; this potential impacts Africa directly with 70 per cent of alumni still on the continent, and the world indirectly through the international class research and development our students produce.

At AIMS, gender equality is not for show. It is vital that we keep moving from discussion to concrete implementation that leads to change in attitudes on all levels.

We are not doing women a favour, our future depends on it.

Thierry Zomahoun is president and CEO of African Institute for Mathematical Sciences (AIMS).