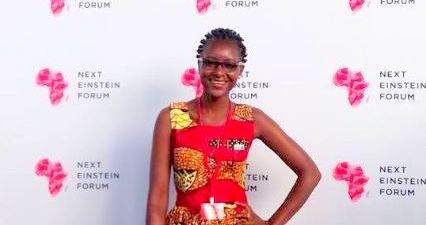 Early this year, Tanzania made headlines when a young scientist was awarded The Next Einstein Forum (NEF) Ambassador award, an award given to young African scientists from each of the African countries.

All thanks to Aneth David, a 26-year-old who is one among few women who has chosen a career in the field of science. The young scientist is embracing a career that less women have opted to embrace across the continent.

As a student at University of Dar es Salaam currently in her final year pursuing MSc in Biotechnology, she is in the process of registering for a PhD in Bioinformatics at SLU University, Sweden.

Explaining how it all started with her ambition to become a scientist, Aneth who is also an academician and scientific researcher at University of Dar es Salaam, Department of Molecular Biology and Biotechnology says she discovered her call to become a scientist at a very young age, remember being very curious at the age of 4, asking questions about everything she could see.

Attending both her primary and secondary school in Moshi, Aneth enjoyed studying Biology subject the most while in secondary school which inspired her to study Bachelor of Science (BSc) in Molecular Biology and Biotechnology at University of Dar es Salaam.

As a young scientific researcher, she attribute her academic supervisors for playing an important role in guiding and inspiring her well and made sure she had the necessary materials for research.

“They have always been like family since my first degree until today, they helped fuel my passion for academics and research,” she says.

As a young academician and scientific researcher at University of Dar es Salaam, Department of Molecular Biology and Biotechnology, Aneth says she has always enjoyed learning and sharing knowledge.

Being that natural inquisitive, it made it easier for her to apply for the award after she got the information from friends though she hesitated at first.

“During the application I thought it was too tough for me to win as their selection criteria had a lot of things such as wanting a Young African scientific researcher who was active in social media and other communication platforms and able to express oneself in different forms, however I decided to give a try and after I received the news that I was selected it felt really good,” she stated.

Explaining more about the award Aneth says The Next Einstein Forum (NEF) Ambassador award was awarded to young African scientists from each of the African countries.

The NEF is an initiative of the African Institute of Mathematical sciences (AIMS) in partnership with the Robert Bosch Stiftung. The Forum aims at bringing the spotlight to young African scientists and their work impacting their countries and Africa in general. The Forum seeks to leverage science and other sectors such as policymaking, civil society, the media and private partners to solve challenges facing Africa.

Not knowing how many participants came from Tanzania or Africa as they submitted their applications privately but she could tell that it was a tough competition.

According to Aneth, the award has strengthened her belief and conviction in science and as a scientist as it has provided her with the platform and credibility to share about the role of science in development and improvement of life with a wider audience in Tanzania and the world in general. “Being a youth ambassador for science in Tanzania, it is an opportunity to push for change in how we as a country solve our challenges in important sectors; health, agriculture, environment and manufacturing. It is time for evidence-based research and decision-making,” she narrates

She adds, “being the NEF Ambassador of Science for Tanzania has given her a great experience and a wide exposure and a chance to speak out and share science. I have started to work with the media, private partners and policy makers to bring about change in how the country sees and uses science,”

“I recently met Dr Hamis Kigwangala to talk about how Biotechnology can modernise the health sector and plans are going well. I also work with EM Tech Foundation to integrate a biotechnological product into agriculture system in Tanzania.”

Explaining about the limited number of women in the science field which is dominated highly by men, Aneth while admitting with that fact that men does dominate the science field, not only in Tanzania but worldwide although at different rates, but generally most men are supportive and treat female scientists as colleagues though sometimes competition arise between the genders. It is common to hear sayings like “How do you let a girl pass you?” That only fueled my effort to study harder so that the saying doesn’t change to “I knew she would not get far, she is a girl”.

“African governments do not make enough financial investment in building facilities for research, acquiring and running scientific research equipment and training scientists. We rely heavily in foreign aid, which is not sustainable and makes it difficult to plan research priorities. In most African countries the policies governing scientific research, development and utilization do not foster advancement of the sector,” she says.

In order to help women establish careers in science across Africa, Aneth believes that a conscious effort needs to be made to encourage women to take up science from a young age.

“The environment for practicing science needs to be improved to accommodate women by taking into consideration our needs as women. Differences between men and women are there and that needs to be respected, not be a source of division and discrimination. And more female scientists need to come out and show their work to inspire young girls to join the field,” she states.