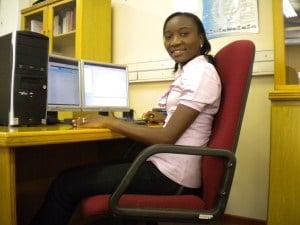 Dr. Fasan Mary Oluwasola from Nigeria graduated from AIMS South Africa in 2008 and later obtained a Master’s and PhD in Digital Forensics from Stellenbosch and Pretoria universities, respectively. Her PhD focused on developing algorithms for the reconstruction of information in a database following a cyber-attack or other damage or deletion of data, particularly for investigative purposes. The findings are useful in enhancing security in computer systems by providing an effective way of investigating crimes involving the manipulation of databases.

In recognition of her work as a PhD student, she was one of ten recipients of the 2012 L’Oreal-UNESCO Women in Science Fellowship in Sub-Saharan Africa. She was honoured to be among ten inspiring women scientists from Sub-Saharan Africa recognised for their science research and awarded fellowships of $20,000 towards their studies. In the same year, she also won the highly competitive Google Anita Borg Memorial Scholarship, an award to female students studying computer science at a university in Europe, Middle East or Africa. Currently, Dr. Oluwasola is an Assistant Professor at the University of Winnipeg in Canada, focusing on digital and database forensics and cyber security.