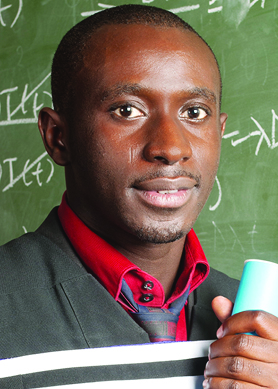 Mr Frederic Ntirenganya, a Rwandan who works in his home country and in Kenya, has designed software to collate years of climate data into meaningful information that can be used to better understand weather trends. He attended the Kigali Institute of Science, Technology and Management where his interest in statistics began. He joined AIMS South Africa in 2013, and his interest in statistics grew, as he realised that in addition to regression functions themselves, the range of programming languages one could use to interpret data were all founded on mathematics.

“The style of teaching I encountered at AIMS was an excellent collaborative effort between students, tutors and lecturers,”says Frederick.

“If the software can be used by meteorologists to better inform those in Rwanda and across the continent who rely on knowledge of weather patterns for their livelihoods, then I consider my hard work worthwhile.” he says.

Building from this experience, he has gone on to do his own teaching in mathematics. In 2014, he joined the African Maths Initiative, hosted by Maseno University in Kenya, where he helped teach mathematics to high school students. It was through the African Maths Initiative that Frederic teamed up with a group of international researchers from Maseno University and the Statistical Service Centre at the University of Reading, UK, to work on
statistical software for climate data. Climate data comes in many formats, and manipulating these various bundles of temperature, wind, precipitation and other weather data into something useful for analysis can be laborious for meteorologists. Software packages that automate the process of data manipulation are thus hugely time saving. Compared to existing software packages, Frederic is working to make his design both more versatile in the formats of data it can use as inputs, and simpler in the commands required to output information. Frederic’s main goal for the software is for it to be both user friendly and accessible. With this in mind, his team has made their code freely available on GitHub, a platform for open-source software.