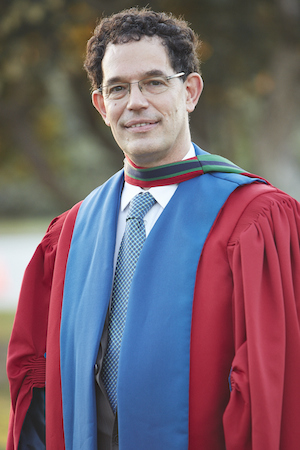 Turok received the honourary doctorate in science honoris causa at an NMMU convocation ceremony on April 9.

“I am amazed and honoured to receive this degree,” Turok said in his address to the convocation. “The opportunity to associate with a university with such a strong spirit was one I couldn’t pass up.”

NMMU is a South African post-secondary education institution with its main administration in the coastal city of Port Elizabeth. It was founded through a merger of three institutions in January 2005, but its history dates back to 1882, with the foundation of the Port Elizabeth Art School.

The University draws international students from all over the world. Turok took a few moments to hail Africa’s contribution to the history of mathematics and reminded the crowd just how far humanity has progressed in understanding the universe through physics and mathematics.

“Twenty thousand years ago, mathematics was invented here in Africa. The oldest mathematical artifacts have been found here in Africa,” he reminded the academics, graduates, students and parents assembled. “We’ve been able to use the knowledge from mathematics to build society’s progress. In fact, every technological advance is underpinned by this knowledge used to build a better world.”

Turok went on to offer an optimistic outlook for the future of Africa and the world. He called upon the graduates to recognize the importance of their leadership as Africa is the continent with the largest demographic of young people. He affirmed that one third of the world’s young people will be in Africa for generations to come.

Turok was instrumental in founding the African Institute for Mathematical Sciences (AIMS) with centres in South Africa, Ghana, Senegal, Cameroon and soon Tanzania. The network provides hands-on and innovative mathematical training to promising students from around the continent.

He was honoured in 2010 with the Advancement in Mathematics award of the South African Mathematical Society as a result of AIMS. He also received a TED (Technology, Entertainment, Design) prize in 2008, which was the launching pad for the AIMS-Next Einstein Initiative, a plan to build 15 AIMS centres across the continent. Turok is certain the next Einstein will emerge in Africa.

Turok was born in Johannesburg, graduated from Churchill College Cambridge and followed this with a PhD from Imperial College, London. He completed a postdoctoral fellowship at Santa Barbara, and then became an associate scientist with the Fermi National Accelerator Laboratory (Fermilab) in Illinois. After that he moved to Princeton, where he became Professor of Physics in 1994. Three years later he was appointed as the Chair of Mathematical Physics in the Department of Applied Mathematics and Theoretical Physics at Cambridge. In 2008, he became Director of the Perimeter Institute for Theoretical Physics in Ontario, Canada, the post he currently holds.

Professor Turok has worked in various areas of mathematical physics and the physics of the early universe. He has collaborated with many illustrious colleagues and together with Prof Stephen Hawking, developed the so-called Hawking-Turok Instanton Solutions which, according to the no-boundary proposal of Hawking and James Hartle, can describe the birth of an inflationary universe. Recently, he collaborated with Paul Steinhardt at Princeton University to develop a cyclic model.

He has over 100 publications in prestigious journals and has been cited over 600 times. Not only has he produced scientific research of the highest quality, he has also been very active in the promotion and popularisation of science. Together with Steinhardt, he authored the popular science book Endless Universe in 2007. In 2012 he was invited to give the CBC Massey Lectures, and these were published in the book, The Universe Within – from Quantum to Cosmos.

Turok’s other honours and awards include: the James Clerk Maxwell Medal, a Packard Fellowship for Science and Engineering and an Alfred P. Sloan Foundation Fellowship. He has been elected a Senior Fellow of Massey College at the University of Toronto. In addition, he recently received a Lane Anderson Award for Science Writing.

Despite spending his entire working life in foreign countries, Neil Turok has not forgotten his African roots.